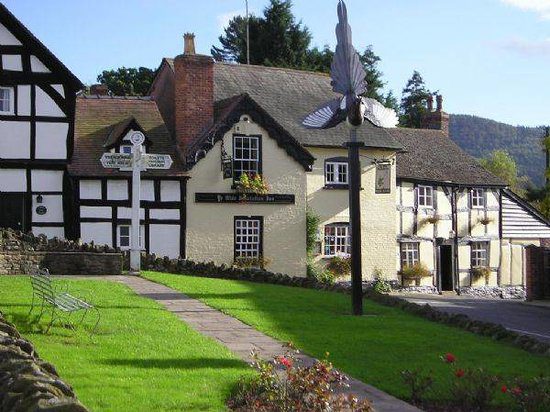 In medieval times Weobley was known as a flourishing market town whose wealth came from wool, known locally as Leominster Ore. It was also known for its ale, glove and nail making. Weobley’s fortunes waxed and waned over the years and with no railway or canal connectipons, the industrial revolution passed Weobley by which led to great poverty. However, it left a legacy of beautiful timber framed houses, many of which still stand and today Weobley is at the heart of a thriving agricultural industry.

The Weobley Heritage Trail will take you on a passage through time, exploring how mediaeval traders sold their wares through unglazed windows onto the street and point out what architectural features to look for in the many building styles found throughout the village. The Trail follows plaques placed at points of interest that explain about the building structure and what would have happened there in times past. Not only is the trail free, but you will find out where the term “hitting the sack” came from and what an “under dog” really is.

You will see where King Charles I stayed after he releaved Hereford from Cromwell’s troops during the Civil War and the impressive memorial dedicated to Col. John Birch who later re-took Hereford that same year for Cromwell using a small party of men cleverly disguised as ice breakers as they crossed the frozen River Wye.